Jumping into the middle of the thread of posts about our desert trip, here’s an on-the-water adventure from yesterday’s paddle with my fellow BASK members.

February 21. We gathered at Buck’s Landing in San Rafael for a paddle up Gallinas Creek. With the prediction of wind and a very high tide, exploring one of the sloughs around the Bay made sense. Many of the tidal sloughs are only accessible by kayak with high tides.

Six of us were ready to launch at 10:45 AM, and after a brief safety talk and a radio check we were on the water. Radios weren’t really called for on this paddle, but since we have them it’s good to make sure they are working. As we paddled up the creek we were entertained by shore birds; avocets, herons, egrets and a variety of other shore birds. At one point we decided to explore a side channel that headed off in the direction of the Marin Civic Center and that took us as far as a culvert under a bridge that was not navigable. Returning to the main channel we continued up the creek to Highway 101. There the creek disappears in dark tunnel under the road. Pitch Black. One of our intrepid paddlers disappeared into the darkness, followed by another. Half-way though the tunnel it makes a turn, and once around the bend, you can see the light at the end of the tunnel. Soon the six of us were on the west side of the highway, looking up at a road sign that read “Marin Co. Civic Center Next Exit.”

Somehow, with the narrow creek we managed to get our boats turned around to head back through the tunnel. Then it was back down the creek to Santa Margarita Island Preserve where we stopped for lunch and took a short walk around the island. Our adventure covered a little over seven miles. You can view more photos here and a map of our route here 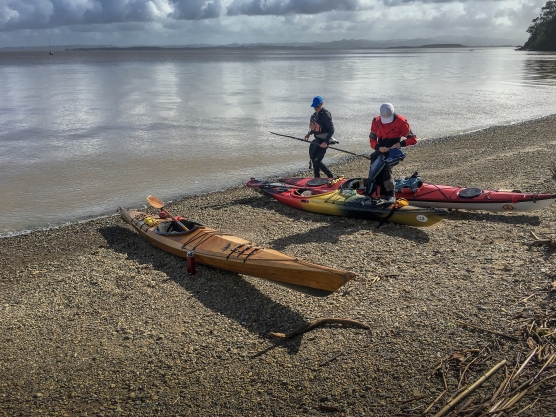 About to luanch from China Camp Beach 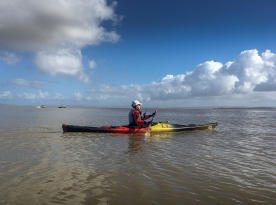 On the water with Mt Tamalpais in the background

On the water with the Sisters in the background

The weather prediction for today was 100% chance of rain, so we were expecting to get wet on our paddle; our Thursday BASK lunch paddle.  The rain held off though and we had a very pleasant paddle, launching from China Camp Beach in Marin and paddling along the shore past the quarry. Our original destination was Dynamite Beach, although we decided to change plans and paddle around the Marin Islands before finding a beach near Point San Pedro, near the quarry for lunch. There were three of us on the paddle, Danny, Susan and myself. More picture here and you can view the track of our paddle here 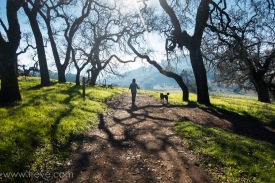 We found another dog friendly walk today; Mount Burdell Open Space Preserve in Marin. Our hike took us over grassy meadows, through groves of oaks and bay trees, and up to the peak at 1558 feet, where we stopped for lunch. There is also a communications tower near the peak. We avoided the tower which seemed to be the popular destination. We found a rock at the top which make a convenient place for our lunch. The rock also had a benchmark marking the top of the peak. A rock wall runs along the ridge at the peak and on the other side of the wall is Olompali State Park, with a trail that goes down to the visitor center. I suppose with some planning you could hike up the route we took and down through Olompali, although being a state park, dogs are not permitted, and our point was to find a dog friendly walk. We covered five miles with a 1300 foot elevation gain. There is quite a panoramic view from the top, although a bit hazy today, despite the clear skies. You can our track log here.

Thursday, December 1 turned out to be a perfect day for paddling. There were two of us on the BASK Thursday Lunch Paddle, Danny and myself. Seemed like we had the entire bay to ourselves with nary another boat in site. We launched from Loch Lomond Yacht Harbor, paddled out around the Marin Islands in perfect paddling conditions, nearly flat calm, and then headed to China Camp where we stopped for lunch.  Our paddle covered 8.5 miles. You can view more photos here. And view the track log here.

Print of the Month