Wishing you a Merry Christmas. We are camped in the Alabama Hills in the Eastern Sierra with what appears to be an annual ritual. We were here last year. This year we represent three generations of Johnsons, the the newest addition, Annabelle, being five months old. We arrived the afternoon of Christmas Eve, set up camp, got the camp fire going along with the coals for the Dutch Oven. Dinner was Chicken Cordon Bleu, with wine to wash it down.

We were surprised by a rain storm passing through in the middle of the night, but we were snug in our beds when the sound of rain on the roof woke us. We woke to find that water that had collected in the camp chairs had frozen solid. Even so we took our time getting the campfire and Dutch Oven coals going, being torn between the photo opportunities of the early morning light and the anticipation of breakfast. Breakfast was quiche cooked in the Dutch Oven. After breakfast we poked around the hills and rocks, A cold wind was starting to find it’s way through our jackets, so we broke camp and headed back to Big Pine.

The Alabama Hills are located in the Eastern Sierra, just west of the town of Lone Pine. The Alabama Hills is managed by the U.S. Bureau of Land Management as the BLM Alabama Hills Recreation Area. There is no fee for camping and there are also not much available for services. No picnic tables, no outhouses, no water. It is also dog friendly; our two dogs were happy to wander around camp off leash. I’m always surprised to see how many people camp here over the Christmas holiday, but that said there is no shortage of spaces to camp. Last year we picked a spot that was exposed and had had a view of Mount Whitney, the tallest mountain peak in the lower 48 states. This year, with the prediction of wind we found a more protected spot with an outcrop of rocks to block the north wind.

This is a popular spot for photographers who wish to photograph the classic morning light on Mount Whitney, Lone Pine Peak and the adjacent Sierra Nevada Mountains. The granite outcroppings also provide endless opportunities for photography. This is also a popular filming location, especially Westerns. Since the 1920s, 150 movies and a dozen or so television shows have been filmed here. There are also dozens of natural arches, with one of the more popular arches being Mobius Arch. The location is also noted it’s dark skies which makes it poplular for astronomy and astro-photography. Not far the North on Highway 395 is the Manzanar National Historic Site, another location worth a visit.

Following two family reunions, back to back, one a small event with seven people, the second a huge event with 95 people, I found myself reflecting on family.

Our road trip started out three weeks ago with a visit to our son and daughter-in-law in Big Pine, California. They will soon be adding another member to the family. Then on to Salt Lake City where we participated in a shower to honor our daughter and her husband, expecting their first baby. Two grandchildren to be joining the family in the next two months. Then on to Rancho Jacoma near Santa Fe where we joined my brothers for a reunion with spouses and a great aunt. We spent five days, eating together, hiking, and reminiscing about family. We stayed in the Butterfly House, with four bedrooms, enough to accommodate our group. My brother Arlen proved his culinary skills, creating gourmet meals for dinner. Our first evening together he cooked salmon which was exquisite. What was missing from our gathering was the younger generation, nieces and nephews. We’ll just have to hope we can get them all together at a future event. 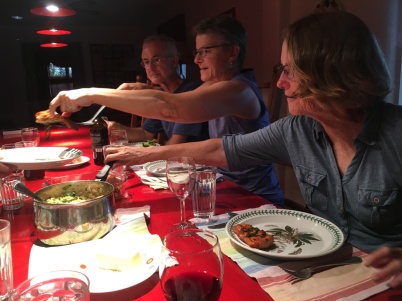 Then on to Phoenix where we joined the Sundt Family reunion. With 95 people the Sheraton Wild Horse Pass resort was an appropriate venue. Dinner was catered at the nearby Rawhide facility. Duke Sundt, the family story teller took to the stage to tell stories and to serenade us.

The next day following breakfast, my wife Joann presented a tribute to her mother who was part of the Sundt clan and who had passed away recently. Joann also took on the job of maintaining the scrap book for her tribe. No small task. The scrap book is huge, and this is only one of the scrap books representing one of the 12 tribes of Sundts. 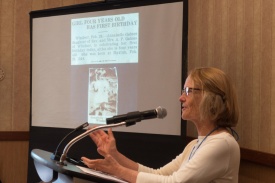 Joann paying tribute to her mother. The Sundt Family Reunion 2018

Joann with the Bertie Tribe Scrapbook. The Sundt Family Reunion 2018

My experience of the Sundts is big hats, big belt buckles and big hearts. I always feel like I belong when we gather.

We’re spending the night at Diamond Campground, near Springville, Utah. Our destination is Santa Fe. We have a week to get there. So we’ll be wandering the southwest for the next few days. No WiFi here so I’m writing a short post on my iPhone. More to follow when I can sit still long enough to edit photos on the laptop. Our travels so far have brought us over the Sierra Nevada Mountains via highway 120 through Yosemite and down the east side of the Sierra to Big Pine, where our son and daughter-in-law are expecting in July. Our first grandchild. From there it was on to Great Basin National Park, and then on to Salt Lake City where we celebrated the anticipated birth of our second grandchild, due in August.

On the tablelands with Skypanel in the foreground and the Sierra Nevada Mountains in the background.

Walking across the tablelands 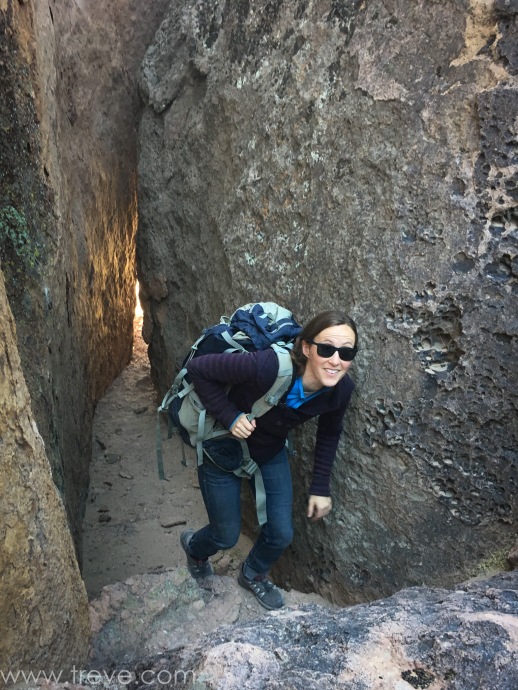 Carson on the tablelands

With family together in Big Pine for a few days we decided to take a hike yesterday, December 22 to explore some of the petroglyphs on the volcanic tablelands near Bishop, California. Much of the tablelands are managed by BLM and and this suited us as a dog-friendly hike since we had three dogs among the six of us. This area is sprinkled with petroglyphs. Some are readily accessible by car, others require some rock scrambling and local knowledge. We visited two sites. I hesitate to say much about the locations since some of these rock art features have been vandalized or ripped off in recent years. A sorry state on the lack of respect we seem to have for the environment, our cultural treasures and our public lands. There is little known about when these artworks were created.  If you wish to find information on the tablelands and the petroglyphs, please contact the Bishop Visitor’s Center. 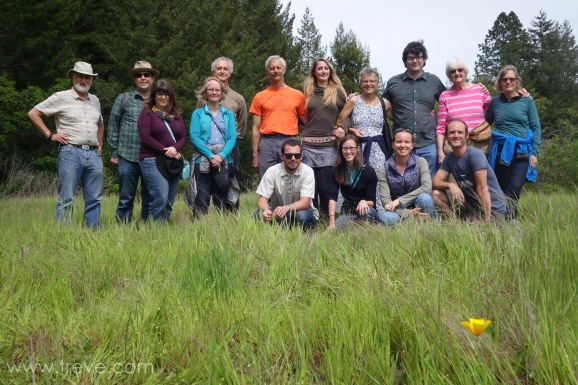 The beach in Santa Cruz 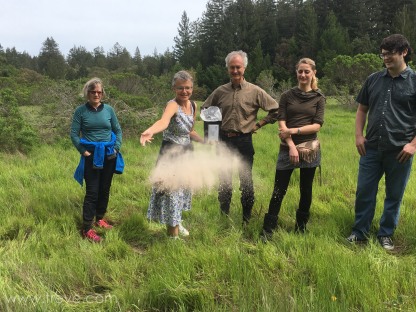 Family on the beach in Santa Cruz

On Saturday, April 22, Earth Day, we gathered as family in Santa Cruz to celebrate the life of my father, Philip W. Johnson who passed away on November 15, 2016. Scattering his ashes seemed to be the appropriate way to celebrate his life.  We formed a circle, and with a brief prayer, we passed the canister of ashes around with each person saying a few words before scattering ashes.  The canister made two rounds.  The first round was a bit somber, with the second round there was a bit more levity. Dad wouldn’t want us morning his passing too long. His remains are now fertilizer for wildflowers in the Santa Cruz Mountains. Following the ceremony we returned to Shiphouse, the big house we had rented for the weekend, had a festive BBQ, and went for a walk on the beach. 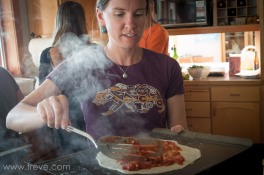 Pedal power kayaking with Arlen in the red boat.

The road through the woods

Kurt showing off some young oysters.

Ann serves up some fresh vegatable soup with ingredients from the garden.

The woods at Kurt and Beth’s place

With a father that’s now 95, I think my two brothers and our families are realizing that we need something more than visiting dad to keep us together. We recently got together on Whidbey Island where my brother Kurt and his wife Beth have a house.  A perfect setting for a reunion, with 28 acres to play in, including beach, woods, meadow, and hiking trails within a short distance. With a bountiful garden fresh seafood we had a lovely time. Dining on fresh crab caught in the harbor, oysters from Kurt’s oyster garden. We managed to get most of the kids, and Aunt Sue in on the festivities as well. Each of the brothers,  Arlen and Kurt and myself each have two kids and we managed to get all of them to join us, with the exception of two, my daughter and our foster sister Laurie, both of whom were not able to get time off of work. I think we tend to be an independent clan, we have varied interest, and it seems we’d rather go our own ways most of the time, so getting  the group of us together is a challenge, and I think the two years we spend in dialog and planning paid off. If you want to see a few more photos from our get-together click here.