Truck campers in the Alabama Hills at dusk.

Treve, Joann and Carson at camp in the Alabama Hills. Breakfast of Quiche cooking in the Diutch Oven. 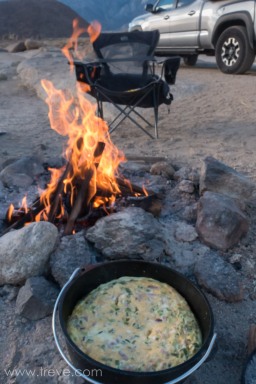 Quiche on the Dutch Oven.

Christmas eve found us in the Eastern Sierra setting up camp in the Alabama Hills. There were four of us and two campers. Our son Aaron and his wife Serena joined us for the overnight camping trip, about 45 minutes south of their place in Big Pine. Part of our mission was to see if we could create a photo of our two campers worthy for Truck Camper Magazine’s calendar. It will remain to be seen if our photos make it into the calendar but we had fun scouting a location, setting up camp and creating photos. The location we picked had a view of the crest of the Sierra’s with the peak of Mount Whitney visible to the west and an outcropping of granite boulders to the east, hiding some of the other campers in the area.

The Alabama Hills is a recreation area managed by the Bureau of Land Management. Open to camping year round. Dog friendly and free of charge. There are no facilities though, so bring your own water.  Inclined to be hot in summer, we had mild winter temperatures, with the thermometer recording a low of 39 degrees overnight.

We’ve recently discovered Dutch Oven cooking and we put our oven to use cooking a savory Christmas eve dinner of chicken and rice. with chunks of chicken breast wrapped in thinly sliced ham and bacon. Breakfast was quiche with ham left over from an early Christmas dinner a couple of days earlier when our daughter and her husband rendezvoused with us on their way to Utah.

When I'm not creating architectural photos for clients (see my primary website at www.treve.com), I like to travel, hike, kayak and enjoy other artistic and cultural pursuits. I'm also concerned about environmental and social issues and issues of faith. View all posts by treve

This site uses Akismet to reduce spam. Learn how your comment data is processed.

Print of the Month